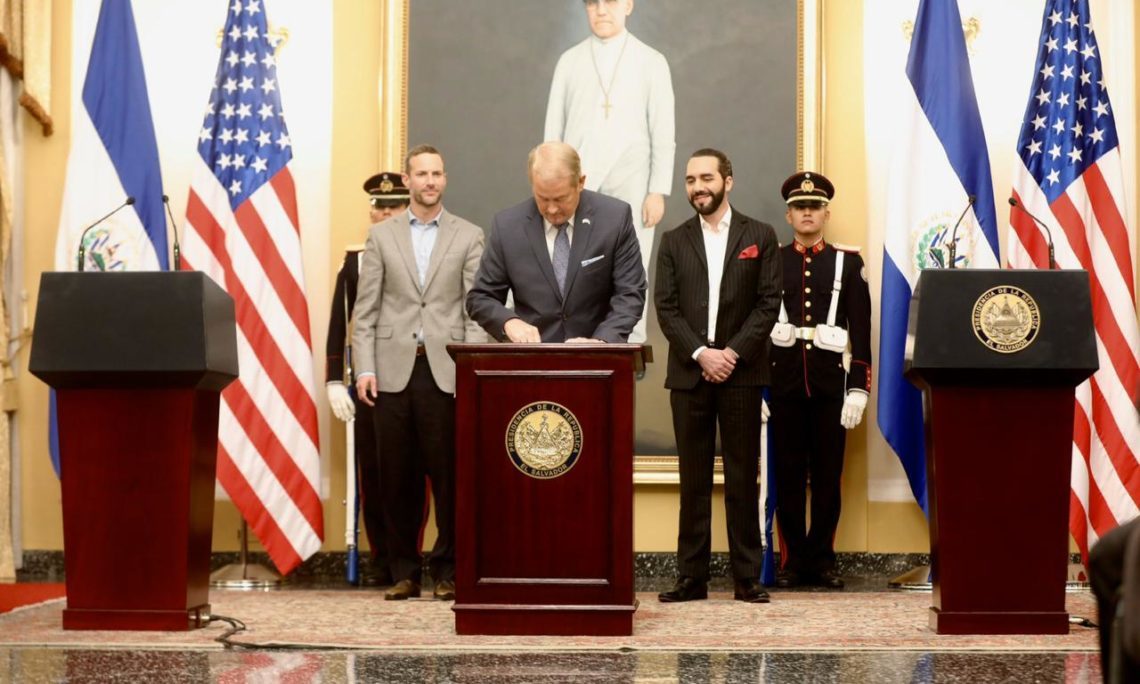 It was almost a year ago on 3 february 2019 when I heard then President Elect Nayib Bukele speak at the heritage foundation in Washington DC. He said some things then that I want to repeat today, because they are relevant today. You can still find his speech too, it’s on youtube, it’s on the internet, and some good search words that you can use to look it up is “heritage” “Bukele” and “a new era”. You study the words that were spoken that day and what has transpired since and you realize this really is a new era for El Salvador. It’s a new era for the partnership that we enjoy between the United States and our friends, brothers and sisters here in El Salvador. In that speech a year ago, President Bukele said he wanted to reduce violence and today we have “Plan Control Territorial”. Murders, homicides, violent crimes are down significantly here in El Salvador. The travel advisory that the United States published dropped to the same level as most of the countries in europe. Significant improvement.

President Bukele also said he wanted to stop corruption and today we are working together to help develop the Comisión Internacional Contra la Impunidad de El Salvador – CICIES. And we are working on it in a matter that provides for the independent actions of the commision while respecting the salvadoran constitution and sovereignty of this nation.

Back then, a year ago, President Bukele said he wanted to improve the economy and in that effort today we are again side by side. As I’ve said many times when El Salvador prospers, the United States prosper and vice versa. Today, I am absolutely delighted to sign this historical agreement that represents the next great step in “A New Era” in El Salvador. This agreement will unleash creative ideas, open us up for business and move us toward shared prosperity for both El Salvador and the United States. To sum it up, it’s a win-win.

America Crece, in english “Growth in the Americas – represents an important step in our long historical relationship. America Crece White House-led economic initiative that facilitates private sector investment in all types of infrastructure—energy, airports, marine ports, roads, telecommunication and even more. We expect that our joint efforts will mobilize billions of dollars, and that’s billions, plural and with a B. this money will go towards improved energy and vital infrastructure in El Salvador.

And América Crece is a perfect complement to President Bukele’s recently announced “Plan de Despegue Económico.” We will work jointly to address regulatory, legal, procurement, and market barriers affecting private sector investment in order to foster an enabling environment for investment that is transparent, competitive, and in line with international best practices. And we will both be working hard together to help U.S. investors understand the possibilities and the potential by investing in a manner that creates critically needed jobs here in El Salvador for its citizens.

As both President Bukele and I have said many times before, the United States is El Salvador’s partner of choice. We are a natural ally and El Salvador is the first, second and third most important partner. We are a true “socio confiable.” We believe in transparent business practices, and accountability and in answering to a higher standard, we believe in treating employees fairly and investing in communities here in El Salvador. And we respect the laws of the countries where we operate.

Our relationship with El Salvador is unique in many ways. Over a third of the people in this world that identify themselves as salvadorans live in the United States. Many of them are dual citizens and many of them are interested in helping us push this initiative forward. This new era in El Salvador. I hear from them all the time. I meet them on my trips back to the United States and they are impressive. And they are hardworking, honest, good and decent people. Let me just end now by saying something I firmly believe. Our people and our economies are entwined, what’s good for one partner is good for the other partner. And because of that we will continue to be a long-term and reliable partner for El Salvador.

We believe in Salvadorans and we believe that America Crece and other shared initiatives will lead to a better and brighter future for us all. Our dreams are possible and today we take a great step forward in realizing those dreams.