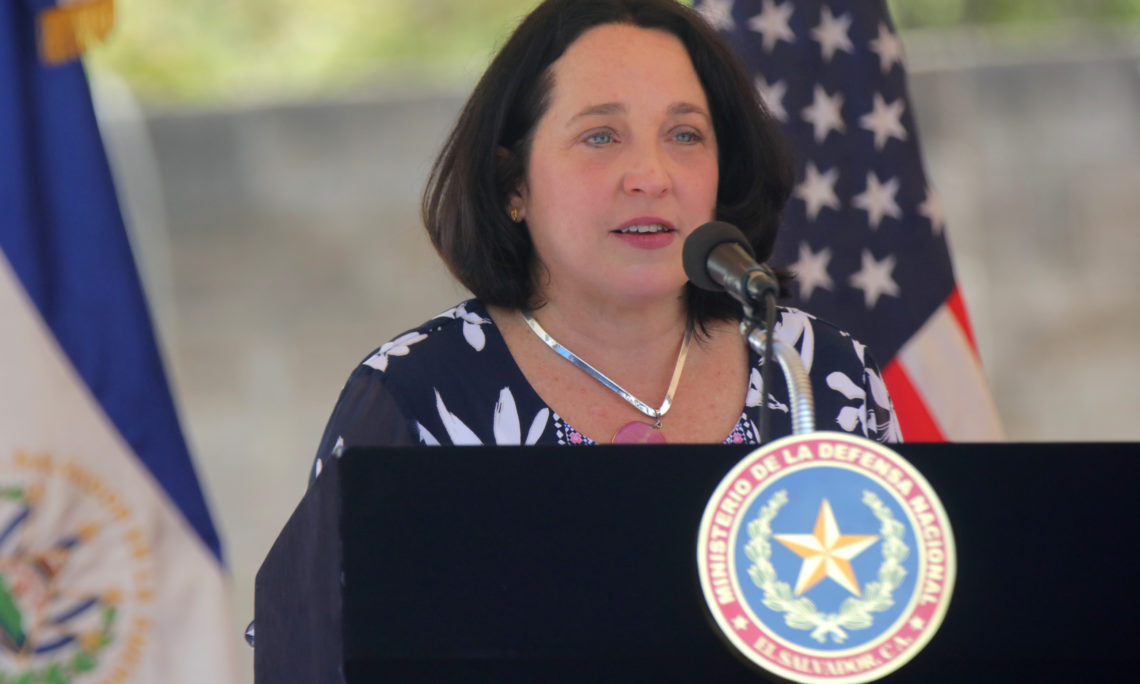 I want to specially thank Minister of Defense Munguía Payez and all the members of the Salvadoran army. We are partners and allies, not only in this project but around the world.

And I also want to thank the members of the San Francisco Hospital and the other members of the different groups that have helped with the consultations and medical surgeries that we did in the past months.

I also want to thank Mayor Francisco Salvador Hirezi, who demonstrates through leadership how he can combine all of the international aid in order to improve his community.

Thanks as well to the NGOs who were part of the team on this project; and also to the National Civil Police.

Three years ago, Zacatecalouca was one of the most dangerous places in El Salvador. In 2015, a total of 109 homicides were reported in this municipality with a homicide rate of 154 homicides per capita. Now the El Salvador Seguro Plan has reduced this by 79 percent. The United States is supporting this effort, and the community has come together to reclaim its public spaces.

What a joy to be back at the Cantón el Amate School Center and see how the community has recovered this public space. It is amazing to see the results that can be obtained when you have a group of people committed and dedicated to a cause. Beyond the Horizon is an initiative of the United States Armed Forces that focuses on humanitarian projects and, in that sense, represents the essence of our cooperation: improving the quality of life for all Salvadorans. This is a goal that the United States Government shares. Thanks to our cooperation, together with the El Salvador Seguro Plan, the country has experienced a 25% reduction in homicides nationwide since 2017. And more than 40% since 2016.

The challenges facing El Salvador are complex and the solution lies in an all-encompassing approach. This comprehensive approach is what guides our efforts. We are working to strengthen the fabric of society through health and education, because we know that our initiatives have a much more extensive impact if we work based on a plan.

In Zacatecoluca we are executing a series of projects within the framework of the El Salvador Seguro Plan. For example, the GREAT violence prevention programs and the Police Athletic League led by our Office of Antinarcotics and Law Enforcement, INL. Thanks to these initiatives, more than 2,600 boys and girls in 18 schools have learned to say “no” to gangs.

Through our Agency for International Development, USAID, we are carrying out the Education for Children and Youth Project. This initiative has benefited 2,700 students from thirteen public schools with technological innovations.

In addition, five outreach centers have been built and equipped, which are meeting and training spaces for young people. These centers have units for women, youth, childhood and adolescence, youth employment, among others.

And thanks to FOMILENIO II, the expansion of the Litoral highway has already begun. An initial investment of $ 67.2 million with which 27 kilometers of highway will be worked from Zacatecoluca to the airport.

Beyond the Horizon it has joined all this investment by renovating four schools and carrying out health days in the municipality. And they also built a medical clinic. Thanks to the efforts of more than 1,800 soldiers, 300 boys and girls will now have a more adequate infrastructure for learning; and we have some of the 1800 here, they’ve rotated in the last four months. And 16,850 patients had the opportunity to receive free medical care.

This is just a sample of the cooperation that the United States carries out in El Salvador at the national level. We are here because we believe in El Salvador. Because we know what Salvadorans have to offer. One of the great privileges that I have as an Ambassador is to have the opportunity to know first-hand what Salvadorans are capable of achieving if given the opportunity. They have an incredibly talented youth and I am here to reaffirm our commitment to this nation.

I want to extend my heartfelt thanks to all members of the US armed forces who were part of Beyond the Horizon, for their effort and dedication. I also want to thank all members of the community, especially the young students, who went to work to improve their school. Now it is your turn to keep this place in the best conditions so that you always have a clean and spacious space where you can receive your classes.

Congratulations to all and let’s continue working together so that all Salvadorans can make their dreams come true in this great little country.