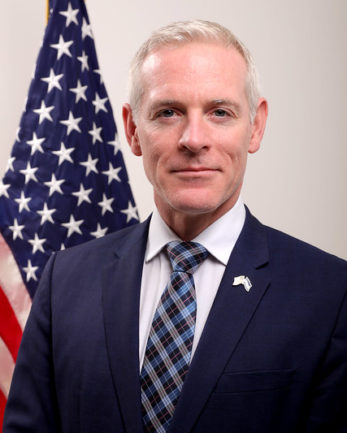 On February, 2020, Brendan O’Brien assumed the position of Acting Deputy Chief of Mission at the U.S. Embassy in San Salvador. A career Foreign Service Officer, Brendan previously served as Consul General at the U.S. Embassy in Buenos Aires, Argentina (2014-2017).  He was the Director of the Office of American Citizens Services and Crisis Management in Washington D.C. (2012-2014).

He served two tours at the U.S. Embassy in Kabul, Afghanistan as the Consul General and Press Attaché (2008-2010) and then worked on the Afghanistan Desk in Washington D.C.  He also held various diplomatic positions abroad in Bogota, Colombia (2005-2007) and Canberra, Australia (2003-2005). Prior to the State Department, Brendan was an International Advisor at Middlebury College in Vermont, the Coordinator of the Boston Peace Corps Office, and a Peace Corps Volunteer in Paraguay.

Brendan earned a Masters in International Relations from Universidad de Externado in Bogota, Colombia and a B.A. in Literature and Theatre from Saint Anselm College in Manchester, NH.  He speaks Spanish, Dari, and Guarani.