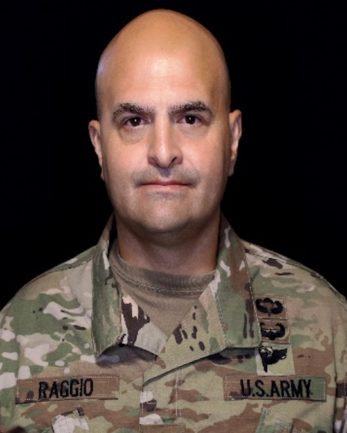 Colonel Pablo Alejandro Raggio assumed his duties as Senior Defense Official/Defense Attaché at U.S. Embassy El Salvador in August 2019. He is an Army Foreign Area Officer (FAO) with 27 years of experience with the U.S. Department of Defense, in both enlisted and commissioned officer ranks. As a FAO, he has served in a multitude of operational, institutional, country team, and contingency support assignments in the Western Hemisphere (WH) and Near East. Colonel Raggio most recently served as Senior Defense Official/Defense Attaché at U.S. Embassy Kingston.

A native of Costa Rica with a keen interest in Louisiana State University (LSU) athletics, Colonel Raggio holds a Bachelor of Science in Management and Administration with a specialization in International Management and a Minor in International Studies from LSU – Shreveport. He also holds a Master of Science in International Relations from Troy University. Colonel Raggio is happily married to the former Ms. Sandra Lizet Guerrero, a native of Honduras, and they have twin daughters, Francesca Sofia and Isabella Giovanna.