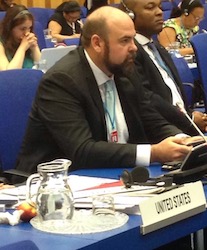 Glenn Tosten began his assignment as the Director of International Narcotics and Law Enforcement Affairs Section at the U.S. Embassy in San Salvador, El Salvador in 2015, where he serves as the Ambassador’s principal advisor on all security related programs.  He is tasked with leading efforts to minimize the impact of transnational crime and illegal drugs on the United States and strengthening relationships between both countries in order to increase the safety, security, and prosperity of communities in El Salvador and the United States.

His previous tours include INL Management Officer in Islamabad, General Services Officer in Sofia, and Consular Officer in Santo Domingo. Prior to joining the Department, Glenn lived and worked in Canada, Peru, Costa Rica, and the Czech Republic and was a Peace Corps volunteer in Nicaragua.  Born and raised on Maryland’s Eastern Shore, Glenn traded in the cornfields for the tobacco fields of southwestern Virginia, where he received his Bachelor of Arts from Hampden-Sydney College.  He also attended the University of London.  Glenn is accompanied here in El Salvador by his wife Karen and their son.