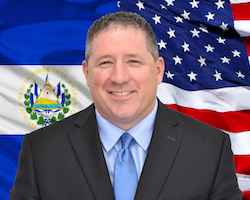 Brent Brown began his United States government career in 1996 working for the U.S. Border Patrol as a Border Patrol Agent.  In 2000, Brent joined the U.S. Department of State as a Special Agent with the Bureau of Diplomatic Security.  Brent completed domestic assignments in Massachusetts, Georgia, Kansas, and New York where he focused on criminal investigations, law enforcement training, and protection of foreign dignitaries. Brent also served as a Special Agent/Regional Security Officer at the United States diplomatic missions in Bahrain, Lebanon, Afghanistan, Cuba, and Saudi Arabia where he provided security to the U.S. diplomatic community and conducted law enforcement liaison with local police.  Brent has a Bachelor of Arts degree in International Relations from Michigan State University and a Master of Science degree in Adult Education from Kansas State University.