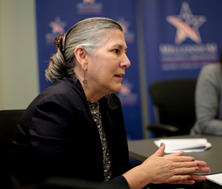 Martha Keays comes to MCC after serving as Country Director for Peace Corps for the last eight years in Guatemala, Kenya, and most recently in Colombia.  Her first tour with Peace Corps was as a volunteer in the early 80s in the mountains of Ecuador where she worked as an agricultural extension agent.  She began her career with the American Red Cross in San Diego, where she managed cross-border programming partnering with the Mexican Red Cross.  Following that she worked in El Salvador where she led the development of a disaster management system linking Red Cross societies across the region.  Ms. Keays went on to serve in various management capacities with the International Federation of Red Cross and Red Crescent Societies (IFRC) in Africa, Central and South America, China and the Pacific, where she managed complex emergencies and large-scale operations and provided support to programming in health and disaster management.  She was appointed Senior Advisor to the Secretary General at the IFRC Secretariat in Geneva, Switzerland before returning to the American Red Cross as their Regional Representative for East Africa based in Nairobi two years later.

Ms. Keays holds a degree in Foreign Policy Studies from the College of William and Mary in Virginia. She is married and has two children.