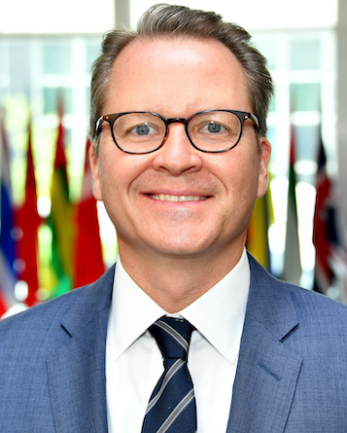 In a delightful twist of history, the town where Matt was born and raised — Marblehead, Massachusetts — is directly linked to a significant accomplishment achieved through United States and El Salvador diplomatic cooperation. On July 20, 1906 officials from El Salvador, Guatemala, Honduras, Costa Rica, and Nicaragua met aboard the U.S.S. Marblehead, anchored off the Guatemalan port of San José. The United States and Mexico, sponsors of the conference, convened these nations in an effort to resolve the conflict that had erupted between El Salvador and Honduras, on the one hand, and Guatemala on the other. All three nations signed the Marblehead Pact, calling for the ending of hostilities, the release of political prisoners, and a commitment to negotiate a treaty of “peace, amity, and navigation.”

Matt combines deep experience in strategy, communications, innovation, and diplomacy with a wide range of international, private sector and public sector experience. In the private sector, he worked for American companies such as The Boston Consulting Group, Procter & Gamble, and i2 Venture Capital. Matt earned a Bachelor of Arts Degree (BA) in Japanese from Colgate University and a Masters in International Affairs (MIA) from the School of International & Public Affairs at Columbia University. He is author of Four Steps to High Impact Strategic Planning in Government published by The Boston Consulting Group and You Have a Strategy. Now What? published by The Foreign Service Journal. Matt is married with three children and his entire family loves living abroad.