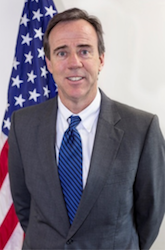 Peter Natiello was sworn in as the U.S. Agency for International Development’s Director for El Salvador on August 11, 2017.

Before that, from 2012 to 2017, Mr. Natiello served as USAID/Colombia Director. From July 2011-July 2012, he served as USAID’s Deputy Mission Director in South Sudan, during the first year of the country’s independence.

From August 2009 through July 2011, Mr. Natiello served as USAID’s Senior Development Advisor to the United States Special Operations Command (USSOCOM), in Tampa, Florida. During his tenure at USSOCOM, he deployed twice to Haiti to assist with coordination of U.S. Government earthquake response. Mr. Natiello was awarded the Joint Civilian Service Commendation medal for his service at USSOCOM.

Mr. Natiello managed USAID’s democracy/governance and conflict mitigation portfolio in Ecuador (2001-2003), and served as a Democracy and Governance Officer in South Africa (1997-2001). He began his career with USAID in Bolivia, where he served as a Project Development Officer from 1992 to 1997.

Prior to joining the Foreign Service, Mr. Natiello served as a Peace Corps Volunteer in Ecuador and subsequently as a Research Analyst with the Inter-American Development Bank in Washington, D.C.

He is fluent in Spanish and proficient in Portuguese. Mr. Natiello has a Bachelor of Arts degree in Political Economy from Colorado College and a Masters of International Affairs from Columbia University.

Mr. Natiello was born in Corning, New York. He is married to the former Ms. Carolina Jurado, and they have three children.