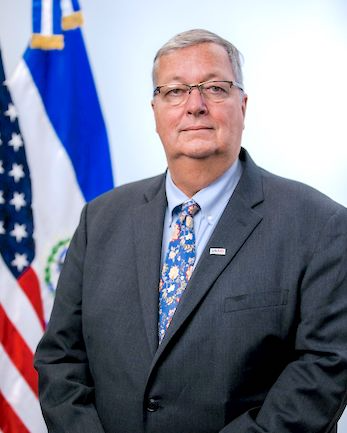 Christopher (Chris) Cushing is the Mission Director to USAID El Salvador since August 2022 where he oversees bilateral and regional programs in Central America and Mexico. Mr. Cushing previously served as the USAID Haiti Mission Director from February 2020 to May 2022. Before Haiti, he joined the Barbados-based USAID Eastern and Southern Caribbean Mission in October 2014 as Mission Director assuming leadership of the Mission’s portfolios in the Organisation of Eastern Caribbean States (OECS) and Barbados, Guyana, Suriname, Trinidad and Tobago, and the Bahamas.

Mr. Cushing served as USAID Mission Director in Ecuador from August 2013 through USAID’s close-out in September 2014. Prior to this he was the Director of the Strategy, Budget, and Program Office (SPO) for Latin America and the Caribbean (LAC), where he oversaw USAID’s Western Hemisphere budget of over $900 million.

Prior to this, Mr. Cushing served as Deputy Director of LAC’s Regional
Sustainable Development (RSD) office, overseeing a diverse technical and sectoral staff; Strategy Team Leader for LAC/SPO; and as Supervisory Program Officer in Panama and Honduras.
Before joining USAID, he served on Peace Corps staff in Paraguay, Costa Rica, Slovakia, and the Baltics. Mr. Cushing was a Peace Volunteer in Agricultural Extension in northern Ecuador from 1981 to 1984.

Mr. Cushing has a master’s degree in Economic and Social Development and his undergraduate degree is in Latin American Studies. He is a member of the Senior Foreign Service with the rank of Minister Counselor and speaks Spanish and French.