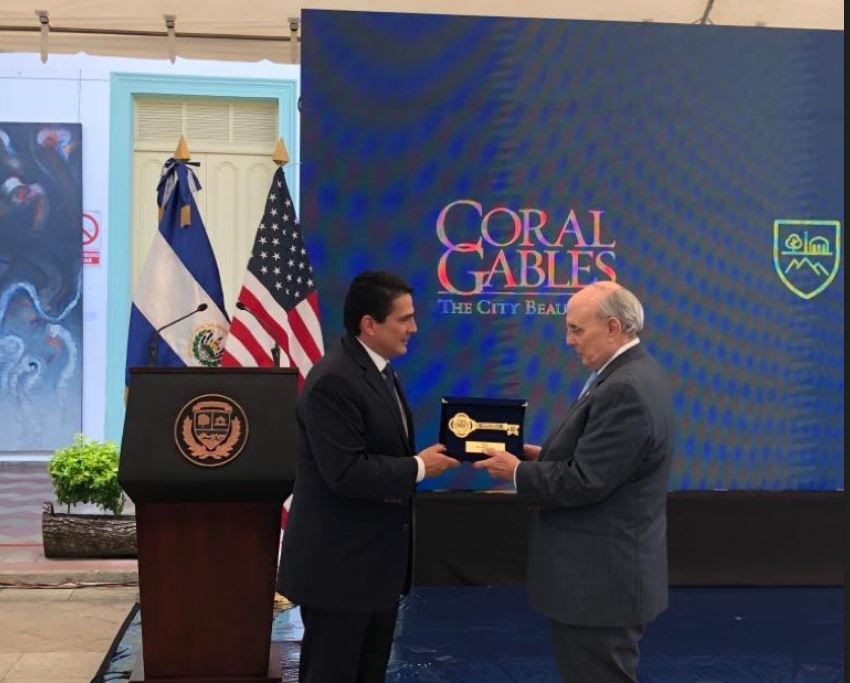 The Mayor of Coral Gables Receives Keys to the City of Santa Tecla.

November 14, 2019 – The mayor of the city of Coral Gables, Florida, USA, Raúl Valdés-Fauli, visited El Salvador between November 13 to 15 in recognition of the sister city arrangement that exists between the two cities. The ceremony was chaired by the mayor of Santa Tecla, Roberto D’Aubuisson, who handed over the keys to the city to Mayor Valdés and appointed him  a guest of honor.

The cooperation between Coral Gables and Santa Tecla began in July 2018, with the signing of a mutual collaboration agreement. This agreement has empowered Santa Tecla, in terms of tourism, security and economic development. In addition, it has allowed the exchange of experiences in the dissemination of the arts, culture and other social programs.

Mayor d’Aubuisson remarked, “With this act we are able to consolidate more firmly the union of two cities that have the same vision and put the interests of our citizens first. Coral Gables is an important city that stands out for the quality of life it offers, development, security, order, cleanliness and respect for heritage; that is the path that Santa Tecla is now following.”

After the event, Mayor d’Aubuisson presented Mayor Valdés-Faul with works of social advancement from children, the elderly and people with disabilities from Santa Tecla,  They also toured the modern video surveillance system “Escudo Tecla”. During his visit, the municipal chief of Coral Gables also showed  Mayor Valdés-Faul around different sectors of the city such as El Cafetalón Park.

During the visit, the United States Ambassador to El Salvador, Ronald Douglas Johnson organized a round table with representatives from the private sector for Mayor Valdés-Fauli  with the objective of promoting investment and economic development in the country.