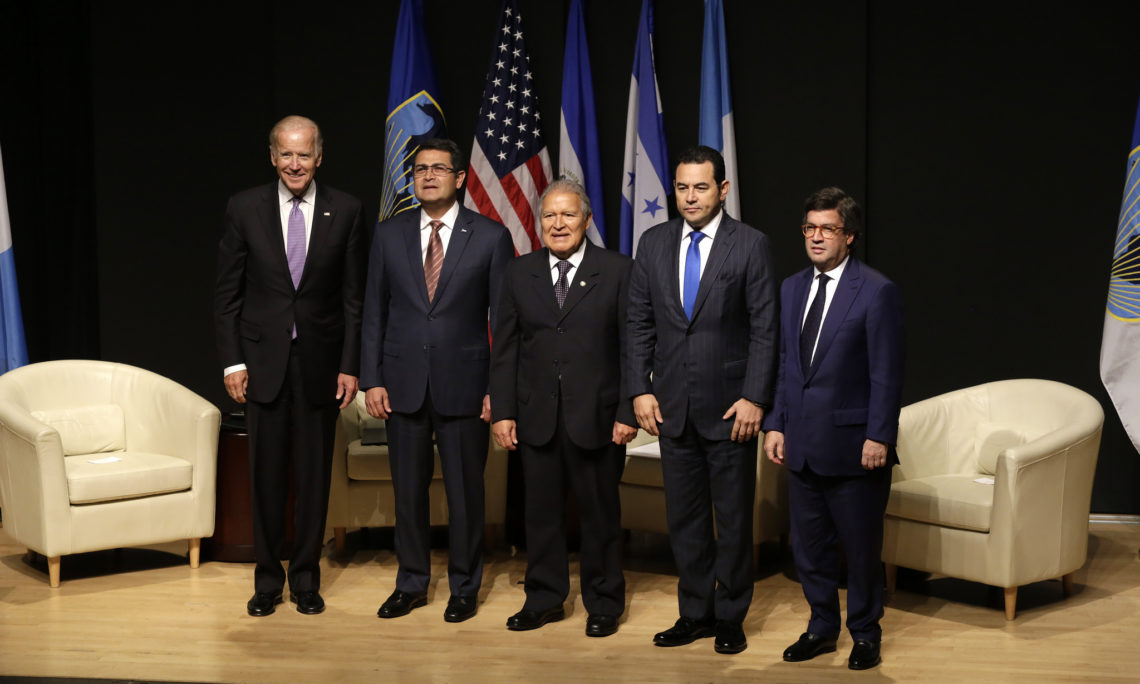 The Presidents of the North Triangle: El Salvador, Salvador Sanchez Ceren; Guatemala, Jimmy Morales; and Honduras, Juan Orlando Hernández; met with U.S. Vice President Joe Biden at the Inter-American Development Bank in Washington, DC to discuss the Partnership for Prosperity Plan and the U.S. Strategy for Engagement in Central America.

The presidents of El Salvador, Salvador Sanchez Cerén; Guatemala, Jimmy Morales; and Honduras, Juan Orlando Hernandez; and the Vice President of the United States, Joe Biden, met at the Inter-American Development Bank in Washington, D.C. on September 23, 2016 to follow up on progress in addressing regional  migration, security, governance, and economic challenges within the framework of the Northern Triangle governments’ Plan of the Alliance for Prosperity and the United States Strategy for Engagement in Central America, with the goal of reducing incentives that drive irregular migration.  The leaders also participated in a dialogue with the private sector and a broader audience of stakeholders on Central America, to discuss innovative activities in the areas of infrastructure, logistics, and energy.

The governments of El Salvador, Guatemala, Honduras, and the United States reaffirmed their commitments enshrined in the Blair House Communique on February 24, 2016.  One such example has been the establishment of consultative groups in each country to provide oversight of the Plan, with participation of the public and private sectors, and of civil society.  The dialogue between the leaders was based on the commitments established during the January 14, February 24, and May 3, 2016 meetings that defined specific objectives with regard to security, governance, and prosperity in the region, including efforts to promote safe, legal, and orderly migration that include public messaging campaigns to combat irregular migration and provide comprehensive assistance to returned migrants.

In their remarks, the Northern Triangle presidents highlighted the progress each government has made, and emphasized the actions undertaken at a regional level, such as the trade and customs integration process, the establishment of a Regional Plan for Combatting Organized Crime, the creation of a Tri-national Force addressing organized crime, and the integration of investigations and information systems related to gangs, with efforts coordinated by public prosecutors.

Additionally, they highlighted progress and accomplishments at the national level:

The three presidents also recognized the efforts by the United States Congress to allocate resources for the Strategy.  They also recognized Vice President Biden for his commitment to the Plan on behalf of the Obama Administration.

Finally, the four leaders agreed to the establishment of the United States-Northern Triangle High Level Dialogue that will further the efforts to promote a secure, stable, and prosperous Central America.