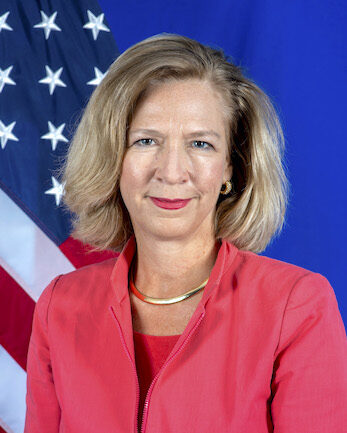 Katherine Duffy Dueholm arrived in El Salvador as Deputy Chief of Mission on August 11, 2022 and immediately assumed the position of Chargé d’Affaires a.i. of U.S. Embassy to the Republic of El Salvador.  Ms. Dueholm joined the Embassy following a two-year tour as the Director for Mexican Affairs at the Department of State.  Before that, she was the Director for Caribbean Affairs from 2018-2020 and Director in the Department of State’s Legislative Affairs Bureau from 2016-2017.  She has also served as Deputy Chief of Mission in Timor-Leste, including over six months as Charge d’Affaires.  Her other overseas assignments include Botswana, Germany, Guyana, and Brazil.  In Washington, she worked as a Special Assistant to then-Secretary of State Madeleine Albright; served on detail to the U.S. Trade Representative’s Office as Deputy Director for the U.S-Chile Free Trade Agreement; and worked on North Korean issues.  Prior to joining the Department of State, she worked at the White House in the successful effort to pass the North American Free Trade Agreement.

Ms. Dueholm was formerly President of the Board at the American School of Brasilia and Treasurer of the National Capitol Area YWCA in Washington, DC.  She has a Bachelor’s Degree from Wake Forest University, and Master’s Degrees from the George Washington University and the National Defense University.  She and her husband Mark have two children, ages 20 and 16.