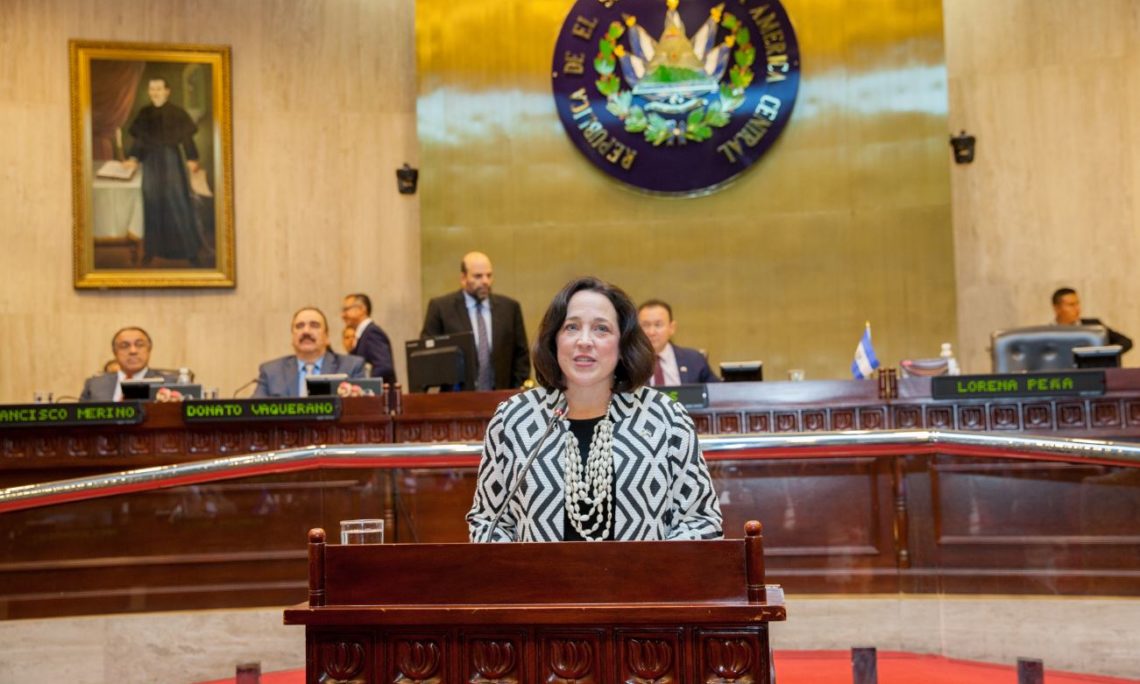 This relationship we have, has developed over the many years and historical moments we have shared.

But this friendship goes beyond the government-to-government relationship. The strongest ties that exist between our nations are those that our people share. Twenty-five percent of Salvadorans live in the United States, of which many are in prominent positions, from mayors and Oscar winners, to the recent appointment of a Salvadoran-American as an astronaut at NASA. I think it is very clear that the community we share transcends borders.

While there are still challenges to face, I am confident that El Salvador can move forward, because they have a plan, such as the Alliance for Prosperity. And in particular with regard to security with the El Salvador Seguro Plan.

Why do I have confidence? It is not because the El Salvador Seguro Plan is perfect.

In English we have a saying: “Don’t let the perfect be the enemy of the good.” The perfect plan does not exist. But for a plan to work, it must have the commitment of all sectors. This is your plan, which you developed with a wide range of stakeholders, coordinated alongside the executive body, the police and community.

This is your plan. The fact that the leadership of your country united regardless of the political lines, and supported this broad effort, is essential for other countries, such as the United States, to support your effort. Which is why last year we readjusted our resources to support the goals defined in the El Salvador Seguro Plan, in particular in regard to the prioritized municipalities.

Our embassy operates on a principle: we are here to support Salvadoran efforts. It is my opinion that this fundamental agreement between you is one of the main reasons why the security effort has gained momentum. Because everyone is moving in the same direction. A similar fundamental agreement in the area of ​​economic growth would help facilitate the implementation of that part of the Alliance for Prosperity. And, yes, I think it’s possible.

His leadership in the legislative assembly is crucial in many aspects of the Alliance for Prosperity and efforts to reach an agreement. Not to the perfect agreement, but to the one who steps in the right direction.

Now we are in one of those historical moments that I mentioned before, not only for our nations, but also for the region. I want to take a few minutes to talk about the Conference on Prosperity and Security for Central America, which took place last week in Miami.

We had three days with an unprecedented level of attention in the Northern Triangle Region. As part of the United States delegation, we had Vice President Pence, Secretary of State Tillerson, Secretary of National Security Kelly, Secretary of Finance Mnuchin, Admiral Tidd of the Southern Command, a delegation of the American Chamber of Commerce, including business leaders operating in the region and a range of other senior officials.

Honduras and Guatemala had an equally impressive delegation. And it doesn’t stop there.

We had Mexico as a co-host with the Secretary of Foreign Affairs and then in most cases, the participation at the ministerial level of Colombia, Panama, Costa Rica, Belize, Canada, Chile, Spain and the European Union.

Also, the international credit institutions are added with the president Luis Moreno of the IDB and the leaders of the World Bank and the International Monetary Fund. Also present were high leaders of the Atlantic Council, including Ambassador Negroponte.

I take the time to emphasize this, because this is an unprecedented historical moment. This region is the focus not only of the United States, but also of many others who want to support Salvadoran, Honduran and Guatemalan efforts. The conference was a great example of how each country has something to offer and experiences to share. For example, the Colombian Minister of Finance shared his experience on improving his tax system, which included a growth in participation in the formal sector.

Honduras shared its economic vision in which it considers its proximity to the United States as its # 1 competitive advantage in the growth of its economy through the export market.

El Salvador shared its experience in the development and implementation of the El Salvador Seguro Plan. This atmosphere of support and political readiness to move forward in the region was the spirit that dominated the talks during the three days of this conference.

Now is the time to focus efforts, in priority areas. Two critical and urgent issues were identified at the conference, in which significant gains can be made in a relatively short time. One, improve the customs system; Two, job creation. The region has a long way to go, but I am certain that working together, you can have great achievements. This is a concept in which we frame all our efforts, this is what has motivated us to carry out the commemoration of our century and a half of friendship.

As part of the celebration of Friendship Day between El Salvador and the United States, we are holding a series of concerts and events throughout the month.

And we are using our Independence Day to continue combining our efforts with the El Salvador Seguro Plan, in a musical festival called “Friendship in Action.” This festival is more than a series of concerts, it is about joining forces to move the country forward. That is why we invite the Symphony of the Americas, based in Florida, to join the Choir and Youth Symphony Orchestra of the Don Bosco Industrial Estate. This union celebrates a group that is making a difference here in El Salvador, providing opportunities for the youth of this country. These concerts are held in the priority areas of the El Salvador Seguro Plan. They begin this Friday in Santa Ana, following in Ahuachapán, Soyapango, Cojutepeque, San Salvador, Ciudad Delgado and Sonsonate. I extend the most sincere invitation not only to participate in this celebration, but also to take advantage of this key moment we are living. The world is on your side, let’s take this momentum to turn possibilities into concrete actions.

The stars have aligned, and the question is, if El Salvador is going to take advantage of this historical moment that the region is experiencing.