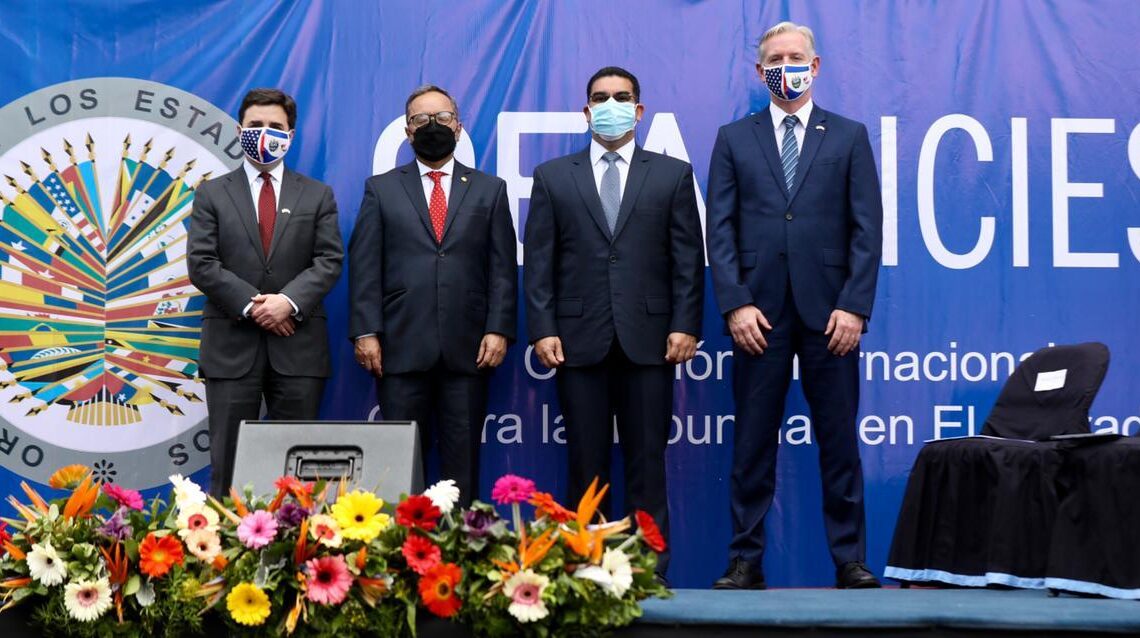 The U.S. Department of State Special Envoy Ricardo Zúñiga and U.S. Embassy Chargé d’Affaires Brendan O’Brien met on Wednesday, April 7 with Ambassador Ronalth Iván Ochaeta, Commissioner of the International Commission Against Impunity in El Salvador (CICIES), to discuss the work being done in the fight against this scourge and to announce U.S. financial support to the OAS General Secretariat for the operation of CICIES.

During the meeting, the U.S. officials and the Commissioner discussed the important work underway in El Salvador and how CICIES can be strengthened to continue collaborating with the local government institutions in a comprehensive fight against corruption.  A successful campaign against corruption and impunity can be achieved with a strong commitment from the Executive, the Judiciary and CICIES.  Both the United States and El Salvador share a joint interest in the fight against corruption and impunity.  In addition, Special Envoy Zúñiga highlighted the importance of productive bilateral relations between the U.S. and El Salvador.  “We will continue to work closely with our Salvadoran partners to address challenges in the region, such as irregular migration, corruption and impunity, governance, respect for human rights, economic opportunity, and security.  Our goal is to help create the conditions for the people of El Salvador to prosper,” he said.

“It is less onerous to prevent than to prosecute corruption. For this reason, it is important for the Commission to unite efforts with all sectors to strengthen Salvadoran institutions so that they can be transparent in the use of public funds, as well as be able to prosecute and punish acts of corruption.  Prevention is the central axis for a paradigm shift in the fight against corruption,” said Commissioner Ochaeta, who thanked the visit of Special Envoy Zúñiga, the financial cooperation and continued support of the U.S. Government for the CICIES/OAS project.

Special Envoy Ricardo Zuñiga stated, “When we talk about the cost of corruption, we are not just talking about money.  We are talking about full compliance with the Democratic Charter and the functions of a democratic state before its citizens, and we are referring to all the consequences that the absence of public funds causes in the social fabric… these consequences disproportionately impact the most vulnerable population, men and women who migrate to another country in a desperate search for survival.  But it also contaminates all government functions and damages society.”

Attorney General Raúl Melara assured that the cooperation agreement between the Attorney General’s Office and the OAS General Secretariat is an important tool in the fight against corruption in the country.  He also emphasized that during his administration an anti-corruption plan has been implemented, resulting in open proceedings against officials of past and present administrations.

CICIES is a body created jointly by the Government of El Salvador and the General Secretariat of the Organization of American States (OAS) in September 2019.  CICIES is mandated to collaborate and cooperate with national institutions responsible for preventing and prosecuting corruption cases in El Salvador; in recent years there have been different criminal proceedings in which corruption networks have been identified, operating to the detriment of the state’s patrimony.