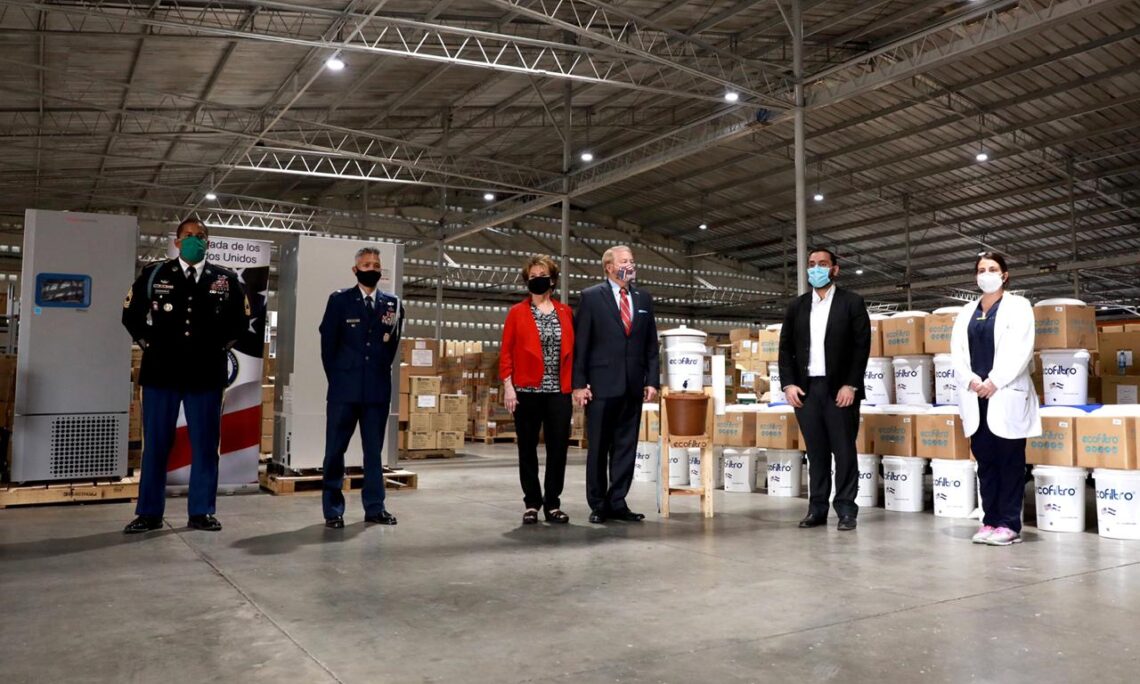 As part of the U.S. government’s continued support to El Salvador, the U.S. Embassy in San Salvador provided a donation consisting of three ultra-low freezers and 1,720 water purifiers to the Salvadoran Ministry of Health (MINSAL) to assist in the emergency created by COVID-19 and the needs created by Tropical Storms Amanda and Cristobal.

The donation was handed over by U.S. Ambassador Ronald Johnson, the head of the military group, Lieutenant Colonel Joel Bolina, and was received by Health Minister Francisco Alabí.

The donation of the three ultra-low freezers will allow MINSAL to increase its capacity to administer up to 5,000 COVID-19 tests per day by having safe and effective freezers to store these test samples. These will be destined to the main hospitals in San Salvador, San Miguel, and Santa Ana.

In addition, the water purifiers will be given to MINSAL to support the people who, because of Tropical Storms Amanda and Cristobal, lost their homes and access to drinking water. The MINSAL will be in charge of distributing them in the most affected areas of the country, including: San Salvador, Sonsonate, Santa Ana, San Miguel and San José Guayabal, Cuscatlán. The purifiers have the capacity to filter and store up to 20 liters of water per day and are effective for two years.

The military group of the U.S. Embassy in El Salvador was able to facilitate these donations through the Humanitarian Assistance Program (HAP) of the United States Southern Command (SOUTHCOM). The HAP program has been supporting the Government of El Salvador through the donation of essential personal protection equipment and kits to mitigate the risk of COVID-19 to support people affected by tropical storms Amanda and Cristobal.

During the emergency, the United States, through SOUTHCOM, has donated protective equipment for personnel on the front lines of the fight against COVID-19, as well as hygiene kits for people in quarantine, among other donations.

The United States has been a strong ally and reliable partner of El Salvador for decades. For more than 50 years, SOUTHCOM has focused its efforts on developing ties and strengthening this alliance with El Salvador, which has included a wide variety of humanitarian projects. Now these efforts are focused on confronting the COVID-19 pandemic, a priority fight in the world.